Dialog Trees, Decision Trees, Behavior Trees, Pine Trees... one plugin for all of the above.

The Branch Plugin is largely made for building general-purpose trees for workflows such as cutscene scripts, NPC/enemy decision making, dialog, and so on. If your primary goal is to build dialog systems, this plugin is probably overengineered for your use case, and also underengineered, as it does not provide an actual dialog engine, just the logic for moving through dialog trees - the UI must be developed separately. However, if you have a dialog system that is part of a larger workflow that you want to represent in tree form (i.e. "have this NPC walk up to the player" node connects to a dialog node of them saying "hey what's up?"), don't want to combine multiple plugins for several slightly-different systems, and are willing to write some GDScript, this plugin might be for you.

Add a BranchController Node as a child to any Node you want to have some sort of branching behavior - dialog trees, movement plans, decision trees, enemy AI, whatever. Set the File Path in the Inspector Tab or just switch to the Branch Editor tab and click the Create new Branch JSON File button. Once you have a Branch JSON file, you can start adding nodes. The Node your BranchController is a child of will be referred to as the Parent Node in the rest of the documentation.

Your tree behinds here. Every time.

This node will call a function on the Parent Node, passing along any specified parameters.

This node will call all specified functions on the Parent Node in sequential order from the top down.

This node will set the value of a variable on the Parent Node to the specified value.

This node will call a function on the Parent Node that should return either true or false. The branch will advanced based on the returned value of the function.

This node will begin calling the specified functions on the Parent Node from the top down until one of them returns true. The branch will advance based on the first function to return true. If all functions return false, then the else branch will be taken.

This node will compare the value of a variable on the Parent Node with the specified values, using the specified comparison operators, advancing based on the first one in the list to evaluate to true. If all comparisons evaluate to false, then the else branch will be taken.

This node will pick a random number between 0 and 1 and then advance to one of the given branches based on the return. By default, each branch has an equal chance of being reached, but if you toggle the Weighted switch you can specify individual weights for each branch.

Specify a dialog message and an optional speaker, plus any other parameters you wish to include for your dialog system. Dialog system not included.

Specify a dialog message and an optional speaker and one or more choices for the user to select. Choices can be configured to only show up when certain conditions are met, such as a certain function returning true or a certain variable comparison being met. Dialog system not included.

The end of the tree.

Advances to the Start Node to do the whole thing over.

Notes. Comments. You know 'em. You love 'em. They can be useful.

You can save pretty much any node as a template, giving it a name and optional group. By doing so, you can then create an identical node from the Template menu button. This can be useful if you have a complex node (such as a function call that has a lot of parameters with specific types) that you intend to use in a lot of places. You can also copy and paste individual nodes to duplicate them in the same graph, but templates span your entire project.

A function call requires the name of a function on the Parent Node and zero or more parameters. Each parameter can have a name (which is used for reference in the graph view only) and a type - String, int, float, bool, or var. If var is selected, the specified value will be treated as the name of a variable on the Parent Node and when this function is executed, the variable's value will be passed to the function. Otherwise, the literal value you specify for this parameter will be passed. Clicking the View Source will bring you to the function definition in the Script Editor if it exists. If the function does not exist, it will try to create a skeleton function with a signature matching the specified parameters.

In the case of the Variable Assignment and Variable Comparison Nodes, and anywhere you can specify var as a parameter/variable type, the name of a variable on the Parent Node can be specified, which will be assigned/evaluated when the node is reached. Some flexibility is allowed, so you can access array parts like arr[5] or dictionary values like dict["key"].

Moves to the next available dialog (or dialog choice) node, evaluating and branching through any non-dialog nodes in the process.

If you have Restart Nodes in your dialog tree, setting this argument to true will treat them as End Nodes and halt iteration. If there's a chance your tree could lead to an infinite loop, set this to true.

The response will be the dictionary {"end": true} if there are no dialog nodes left, or a dictionary with the following keys:

Chooses the dialog choice in index idx in the current Dialog Choice node and then advances based on that. stop_at_loop behaves the same as it does in get_next_dialog. Evaluates until the next dialog node is reached.

Returns false if you provided an invalid index value (less than 0 or greater than or equal to the choice array's size). Otherwise returns the next dialog node (with the same format described in get_next_dialog) or {"end": true} if there are none left.

Immediately evaluates and moves through nodes until an End Node or a node with no successors is reached. Warning: this can lead to an infinite loop if you have a Reset Node.

Returns true if the current_node is an End Node or has no successors. Returns false if it s a Reset Node or the node has successors.

Executes any actions on the current node and moves on to the next node based its results. Returns false if this is the last node in the branch, true otherwise.

A dictionary of all of the tree's nodes. Not recommended to use unless you really want to get into the weeds of it.

A dictionary of the currently active node's information. Also not recommended to use unless all of the functions above are insufficient for what you need.

A scene with a BranchController that contains every non-dialog node in it. For seeing how they work.

Copyleft, but, like, whatever. If you've read this far and you're some new indie gamedev or something who really thinks this code will help you but for some reason you're very determined not to open source your game for whatever reason, I think that's weird but realistically don't care. If your game or project makes less than $1,000 or something, you can interpret this as me granting you a license to use this code in your proprietary game (with credit). If your project makes more than that, either release its source under a license compatible with the AGPLv3, take my code out of your project, or send me ten bucks.

$10? honestly if they made $1,000 that's not a bad deal. XD although i think i should make a list of these plugins incase i ever actually get anything even close to working or playable. (ignore the $1 typo XD)

I think I've seen a few Godot Plugin collections circling around Itch.io recently, too! Might be easier to start with one of those and then add any other cool ones you find! 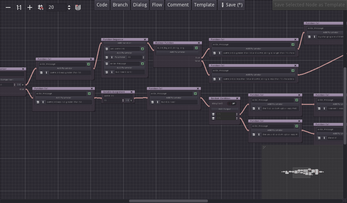 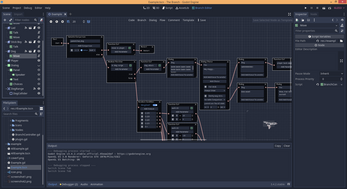 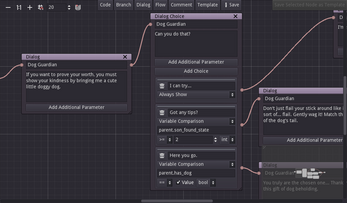