This node will display a specified user input, such as a keypress, a gamepad button (XBox, Sony, and Nintendo styles), or a direction on an analog stick or d-pad. Unless you really want to show a very specific symbol devoid of context or meaning, you should just use the ActionInput node (described below) instead.

A SpriteFrames tres file containing a default animation with 16 frames to represent the following, in order: 0. face button

A SpriteFrames tres file containing a default animation with 5 frames to represent the following, in order: 0. a directional arrow pointing up (to represent keyboard arrow keys)

A DynamicFont tres file containing a font to be used to display button/key symbols on the sprites.

The KeyList or JoyStickList of the input to display.

Whether or not to tint the button with the pressed_tint value.

Tint the button to indicate it is being pressed down when the pressed value is true.

The direction of the axis if one is specified. 0 if the specified key_code is not an axis, 1 and -1 for positive and negative, respectively.

The font color of the symbol text.

How much the text or symbol on a given display type should be offset from the center of the Node. If you're using a custom sheet value, the default offsets may not match your sprite frames, so tweak these to your liking.

The "long key" type (sprite index 4 in sheet) is used for keys/buttons that might have longer names, like "Tab", "Start" or "Enter." The display text will be scaled down to fit based on this value.

All of the above, but gamepad_type, key_code, pressed, and axis will be overwritten as needed based on the ActionDisplay Node's action value and should not be manually set. Variables unique to the ActionDisplay are:

The name of an action, as specified in Project Settings > Input Map. This Node will show which button/key should be pressed to trigger this action. If multiple events of the same type (such as multiple InputEventKey mappings), the first one will be used. For example, the default ui_accept action accepts both the Enter key, Space key, and Device 0, Button 0 (DualShock Cross, Xbox A, Nintendo B) as its events. When no gamepad is plugged in, this Node will depict an Enter key - not the Space key. If a gamepad is plugged in, this Node will depict a button with a cross symbol, A, or B in it, depending on the type of gamepad.

The device id to compare this action against. In the Input Map, when you see things like Device X, Axis 0 or Device X, Button 3, this is the X.

If true, this Node will display a "pressed" graphic (based on the pressed_tint) when the action key/button/axis is pressed. If false, this Node's graphic will not change based on player input.

If you wish to update the action of this Node in code, you can just call $ActionDisplay.action = "ui_accept" and this setter function will be called, but if you need to, you can also call this function using the Node's group (get_tree().call_group("action_display", "set_action", "ui_accept")). The main reason you might want to use this technique would be if you're reassigning the controls for an action, then you can trigger a refresh of all relevant Nodes with get_tree().call_group("action_display_your_action_name", "set_action", "your_action_name").

While the InputDisplay will always update automatically in the Godot Editor, the ActionDisplay will not update based on the action value due to the behavior of the Input Map settings in Godot. To my knowledge, there is no fix for this in Godot 3.4. If you wish to see how the Node looks in the Editor, you can set the gamepad_type, key_code and axis manually in the Inspector panel to preview the styles. However, they will be immediately overwritten based on the action value at runtime.

A Button with a dynamically updating ActionDisplay as its icon. button_down, button_up, and pressed signals are emitted as they would be for a normal button, but will also be emitted when the user presses/releases the relevant action.

By default, this uses an ActionDisplay with its default styles applied as its icon. If you want to change things (like the sheet and font), just make a new scene with just your customized ActionDisplay in it, save that scene, and select it here.

The InputMap action you want to tie to this button. Passes the value down to the action variable of the ActionDisplay.

If you're using a custom_display_action and your icons aren't 64x64, resize them here.

Just shows off a the nodes a bit. Nothing really special here. Main thing of note is that when you connect/disconnect gamepads, you can see the ActionInput Nodes updating automatically.

Showing off the ActionButton Node. Two buttons that can be activated by clicking or pressing the relevant key/button.

Copyleft, but, like, whatever. If you've read this far and you're some new indie gamedev or something who really thinks this code will help you but for some reason you're very determined not to open source your game for whatever reason, I think that's weird but realistically don't care. If your game or project makes less than $1,000 or something, you can interpret this as me granting you a license to use this code in your proprietary game. If your project makes more than that, either release its source under a license compatible with the AGPLv3, take my code out of your project, or send me ten bucks.

In the Godot Editor, go to Project Settings > Plugins and enable the Input Button Plugin. You can now add InputDisplay, ActionDisplay, and ActionButton nodes to your project. 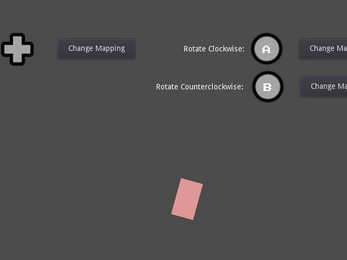