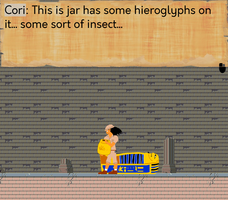 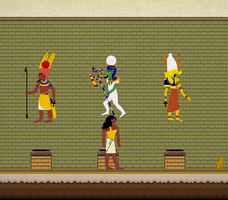 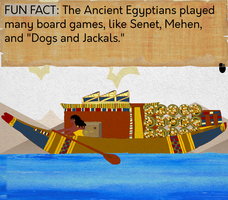 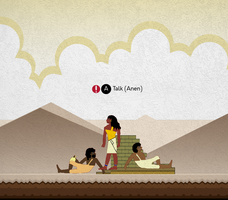 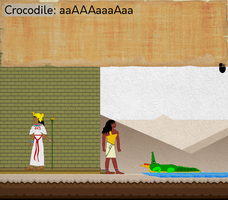 Ancient Egypt is a large and daunting land. If you're ever stuck, feel free to consult this guide!

I. The Beeginning
The game begins with a short introductory sequence setting the scene, ending with you boarding your new raft in the city of Waset. From there, you're free to ride your boat to any of the seven cities available in the game! Each city has its own people, merchants, temples, and more to interact with. You can go to any of the cities in any order you want, but when traveling, you should keep your eye on whether or not your destination will be in its flowering season or not. If you arrive in a city that isn't in season, you won't be able to harvest any plants or pollinate them! The seasons change over time, and time only passes when you are riding your boat, so keep this in mind!

II. The Endbeeng
In order to complete the game, you'll need to return to the city of Waset and talk to the guard in front of Pharaoh Amenhotep III after offering gifts to at least 5 gods or goddesses at the temples throughout Egypt. It can be any five, and you don't even need to visit every city if you don't want to, but each city has its own unique items to find, so make sure you look everywhere for the things you need to offer to the gods! Once you prove your worth to Amenhotep's guard, talk to Amenhotep to start wrapping things up.

III. Basic Gameplay
Most of your time will be spent going from city to city, dropping bees off at plants, talking and trading with people, making offerings to altars, looking around, learning Fun Facts about Ancient Egypt and Bees, then collecting your bees and heading back to your raft. If bees are pollinating a plant for more than 15 seconds, they will collect nectar. The longer they are on a plant, the more nectar they will collect.
Once you collect your bees and bring them back to your raft, they will start making honey. Honey is only produced when time progresses, and time only progresses when you ride your raft between cities, so pick a new location and set sail for adventure! The longer you are at sea, the more honey you'll collect.
After arriving at your destination, approach your beehives and press the Primary Action button to smoke the hives. If you don't have any incense, you won't be able to collect anything, so make sure you stop by the incense seller in the city of Shedet if you're running low! Once you smoke the hive, honey and beeswax will be added to your inventory.

IV. Trading and Offering
There are many people willing to trade with you, and many altars to the gods to offer gifts to. For quick reference, they are all compiled here, but don't peek unless you're really stuck!